The bloody and sometimes sad history of Ralph’s Bay

Just a few hundred metres from the busy Rokeby Road is Ralph’s Bay, the original waterways and lands of the Mumirimina people. Often deserted, except for a rich variety of birds, this calm stretch of water has seen much death and tragedy in the 230 years since it was named after a visiting British sea captain.

Just two years after the start of British settlement, a brutal industry began with Ralph’s Bay at the centre of it – whaling. William Collins, Hobart’s first harbour master, was the first to make money by slaughtering the slow moving southern right whales that wintered with their calves in the Derwent River. There were plenty of whales, at least at the start, with Reverend Robert Knopwood noting in his diary: ‘We passed so many whales that it was dangerous for the boat to go up the river unless you kept near the shore.’

Collins set up a whaling station in 1805 in Ralph’s Bay, at the point just west of Droughty Point. A lookout from the hill, enough men willing to row out to catch the whale, a harpooner and large metal try pots were the bare minimum to set up an operation.

Bay whaling meant whales were harpooned and killed close to land, turning the sea red with blood as they were dragged to shore.

The process of reducing blubber to oil in the pots gave the place its name – Trywork Point. Blubber was commonly used to feed the fire under the try pots giving the smoke a black and nauseating stench.

The ever-curious Reverend Knopwood, investigated, noting ‘At 9, I went across the river to see the tryworks. They had great quantities of oil casks.’ The casks mostly travelled to England to light London’s streets with the oil’s smoky flame.

Collins kept his whaling operation going until 1818. By this time, bay whaling was booming with 50 more whaling stations stretching down the coast to Recherche Bay, in Tasmania’s Southeast. They lasted until the 1850s when whales were hunted almost to extinction.

Meanwhile, farming was going from strength to strength at Clarence Plains, including on Droughty Point, where the Chipman family farmed for more than 100 years until the 1940s. While droughty in Scottish means dry, some speculated it wasn’t the land that was dry, but the farmers who lived so far away from the pubs.

The Clarence Plains boasted many inns and pubs in its early years. The Brown Cow was said to be a particular favourite among sailors eagerly coming ashore from ships anchored in Ralph’s Bay.

Ships moored in the safe harbour to pick up produce from farms on Clarence Plains to transport to Hobart or direct to the Sydney colony which was struggling in those early years. This included corn, milled at the colony’s first windmill on the Stanfield’s farm, now the site of the Police Academy.

Governor Macquarie, visiting the farm in 1811, seemed to enjoy his visit, writing that Hobart was ‘a very pleasant row of ten miles up the River Derwent from Ralph’s Bay.’ Daniel Stanfield later exported the first Tasmanian apples to England.
A ship passing by Tasmania in the 1850s led to the sandy beach between Trywork and Droughty Points given the name ‘Chinaman’s Bay’.

The ship bound for South America with 400 Chinese labourers on board was struck by a fever epidemic. Calling in to Hobart for help, bodies were dumped overboard. At least one body washed up on the beach.

Writing 80 years later, Mabel Hookey mentioned one of the grisliest items she had seen when visiting her grandfather at Rokeby House was “a whip of gruesome interest, plaited from the pigtails of some drowned Chinaman who came ashore on a Rokeby beach.”

Ralph’s Bay wasn’t always a safe haven for people living locally. After Reverend Knopwood established a cemetery at Rokeby in 1826, the settlers at South Arm buried their dead there too, bringing them by water across Ralph’s Bay.

Mabel Hookey described this as ‘a dangerous journey in squally weather, particularly the return, when the men of the party, having warmed their hearts with rum, were not at their best in handling the boats.’

She goes on to relate the tragic story of Susannah Musk from South Arm ‘who was unfortunately drowned in the sixteenth year of her age with five others, on their return from a funeral, by the upsetting of a boat, April 8th, 1855’. Susannah and the others were buried in St Mathew’s cemetery.

The Chaplain: Being some further account of the days of Bobby Knopwood, by Mabel Hookey. Fuller’s Bookshop, Hobart, 1943 (published 1970).

**Shaping the Plains is a One Community Together Project supported by a Clarence City Council Recovery Grant. 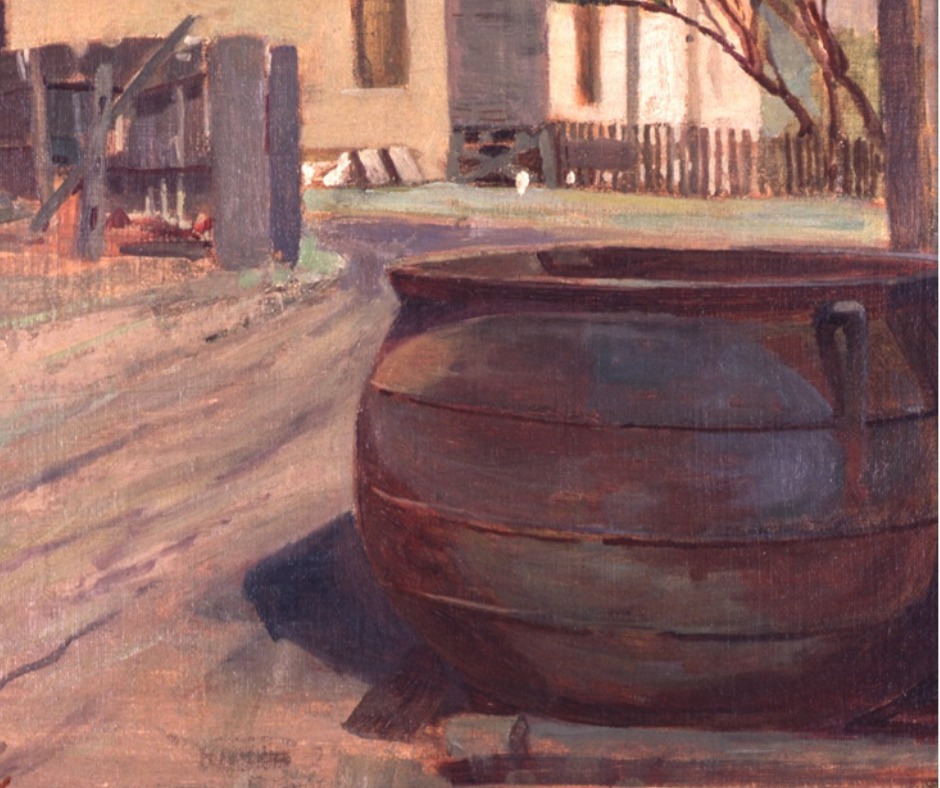