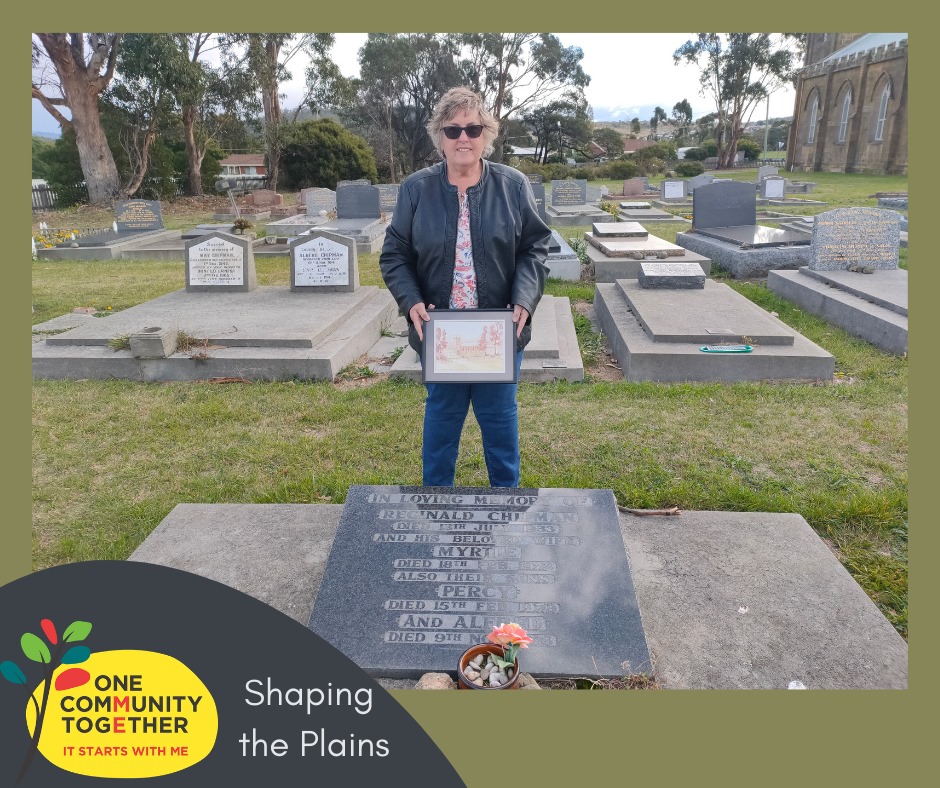 This story starts in October 1841, when one Charles Chipman was born – Pauline’s great, great, great, great grandfather. Charles and his family were farmers in Clarence Plains; in fact, they were considered some of the best in the area at the time. Young Charles kept a vivid diary of his life on the farm from 1866 until 1870, telling tales of setting a broken leg of a cow, using basic machinery of the era in wonder, and an extensive list of the produce his family grew and harvested. This included, but was certainly not limited to, wheat, potatoes, gooseberries, milk from cows and sheep, wool, and the meat from them, too.

Charles was the churchwarden of St Matthews Church, attending meetings regarding the church building and the wellbeing of the congregation. His diaries are important to the history of Clarence Plains because so many accounts from the time detail ex-convict families engaging in theft, drinking, and debauchery. Charles’ diary speaks of many families that were, indeed, respectable and hard-working.

Charles Chipman’s nine children went on to have children of their own, and many roots from the Chipman family extend through these humble suburbs. In so many of the famed buildings and locations of the era, the Chipman name is reoccurring and ever-present. Pauline’s grandmother lived in the old Horse and Jockey Inn, which was lost in the devastating 1967 bushfires. Pauline recalled the grand ballroom in the front, and the post office attached to the side of the building, which operated while her family lived inside. Her parents lived at the old McArdell’s School, built in the 1830s – another building lost to the fires. It was with a sense of sadness Pauline showed me photos and articles about these heritage buildings ripped from not only her family’s history, but the history of Clarence Plains.

Pauline’s family built a house in Rokeby on an acreage and made a peaceful life for themselves. She walked to the beach, swam in the rivers nearby, and picked fruit. Pauline recalled the day of the 1967 bushfires:

“I was in grade six and I was at school that day. I remember it was such a hot day… and we were evacuated from the school. I was put into a teacher’s car, other students in trucks. I watched as the flames leaped across the hill to the school. The students were taken to the beach to wait for the fire to pass.

I remember heading home and the house was empty. I was so scared. The smell of smoke was everywhere. I found everyone hiding at the back of the block, Mum using wet cloth and a bucket to put out small fires in the grass. It will stay with me forever… the smell. It lingered for weeks. The horrible smell of smoke was in everything.”

Pauline mentioned Ms Foot, from a previous story in this series, and how she set up a collection point for donations of food and clothes at the watch house where she lived. People could go to the house and pick up essentials.

Later in her life, Pauline was married at the same church her thrice great grandfather visited on Sundays and was the warden of. The bodies of Charles, his wife, and several other family members are buried outside in the yard of the church. She continued to live in Clarence Plains despite the trauma of the fires, and with her own children, carried the sixth generation of Chipman descendants on this land. What an amazing family.
The picture Pauline is holding is a gorgeous painting by local artist Chris Blunden, which her mother commissioned. All photos provided by Pauline, or myself (Finn). All information is Pauline’s family history, which she has researched extensively.

The Shaping the Plains Project is supported by the Clarence City Council Recovery Grant.