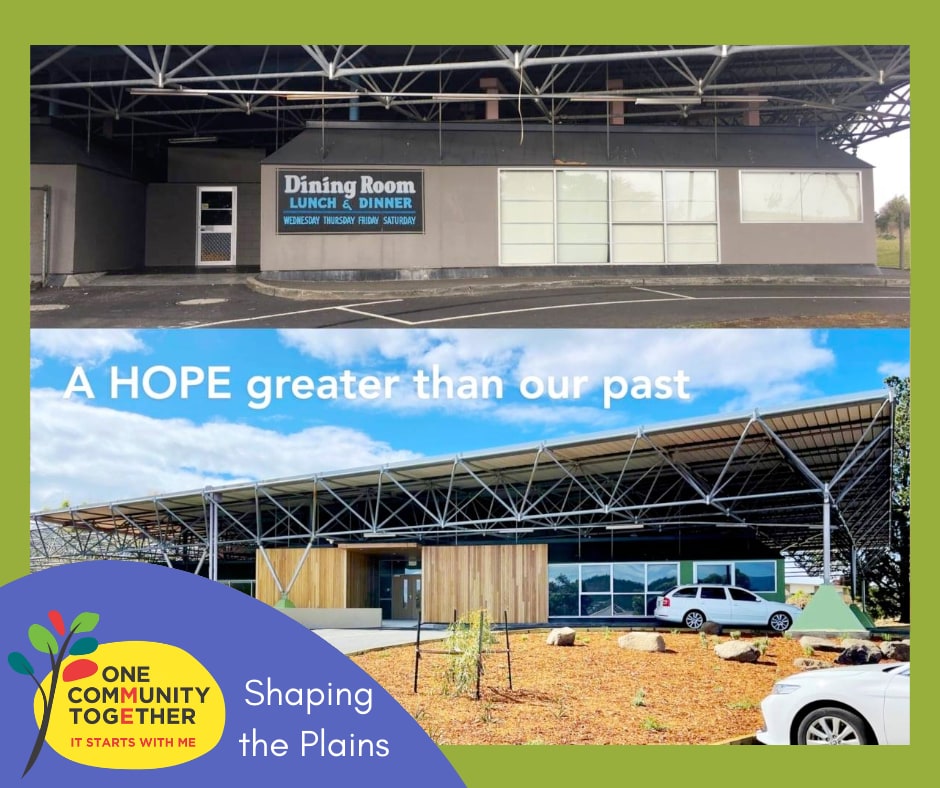 There is a plot of land in Rokeby that you have probably passed hundreds of times and thought very little about. Ralph Terrace is a small street off South Arm Road, with only a handful of houses and a large building at the back. Many people have no idea it even exists, but this land and the buildings on it (spanning from 1886 to now!) have a long and complex history.

So, let’s go back to July 1886. At this time, a parsonage was built on the huge block, and no houses or fencing blocked access to St Matthews Church and the adjacent graveyard. It was all one huge patch of land, with trees, sheep, and endless seas of grass. The parsonage served as living quarters for the clergymen of St Matthews, and they could walk to and from their home to their place of worship with ease.

In 1967, a date we frequently return to in these ‘Shaping the Plains’ stories, the bushfires of the time burned the parsonage to the ground. Nothing remained. The land was purchased after the fires and a pub was built in its place in 1977, called Knopwood’s Tavern. The pub was renamed to Village Green Tavern at some point in its life, and over time became more and more run down. Many residents of Clarence Plains have significant memories from its time as a Tavern.

Things began to look up in 2015, when the pub was privately put up for sale and purchased by Grace Church as a new home for community gatherings. This purchase would prove to be, with no pun intended, one of the biggest tests of faith for the church. The building itself is bizarre in its construction – we’re aware of only one other building like it in the entire country. The rigs attached to the roofing and the pillars to the ground, are built to withstand cyclonic winds. It is no surprise then, that the other building of its design is in Far North Queensland, where cyclones are regular. We aren’t sure why the pub was built like this.

The building had decades of accumulated rubbish that needed to be cleared. Half of the structure was not up to code, with pipes incorrectly sized, wiring that needed to be replaced, building materials past their use by date and toilets that had no disabled access. The members of the church heading the project have spent five years working hard to transform the tired rundown building into something the community could be proud of.

Each year a new stage was tackled and slowly but surely the building has started to transform and today looks nothing like the dirty grey building it was 5 years ago. For now, the attractive space is the home of the One Community Together Project Officer and hosts community events, meetings, youth groups, training courses, and everything in-between. Loaves and Fishes, a community group that cooks, freezes, and distributes thousands of meals to hungry families across Tasmania, plan to use the condemned pub kitchen to cook in the south of the state starting 2022. The next big project is renovating said condemned kitchen, which was in a very poor state when the building was purchased.

“It is a gift to our community,” says Dermot, the manager of the Grace Centre and the Pastor of Grace Church. “Start where you are, use what you have, do what you can, has been our motto right from the start of the project.”. When you show a community that you are truly there for them, with no agenda, and no strings attached, people start to open up and it’s amazing what you can achieve.”

The Grace Centre sits on a five-acre lot, with attached carpark. In the past it has held markets and was to host the Clarence Plains Harvest festival before COVID closed everything down last year, with plans for these events to come back in the future. It is a centre for ordinary people caring about their community. Piece by piece, it has eventually fallen into place.

SOURCES: Grace Church, historical documents collected by Wendy Andrew, and old newspaper clippings from the time.
IMAGES: Mary Reynolds is the artist of the drawing of the church and the parsonage and the land that connected them. Photos of the Grace Centre taken by Dermot from Grace Church.