Skip to content
Rokeby House – The home of Mabel Hookey 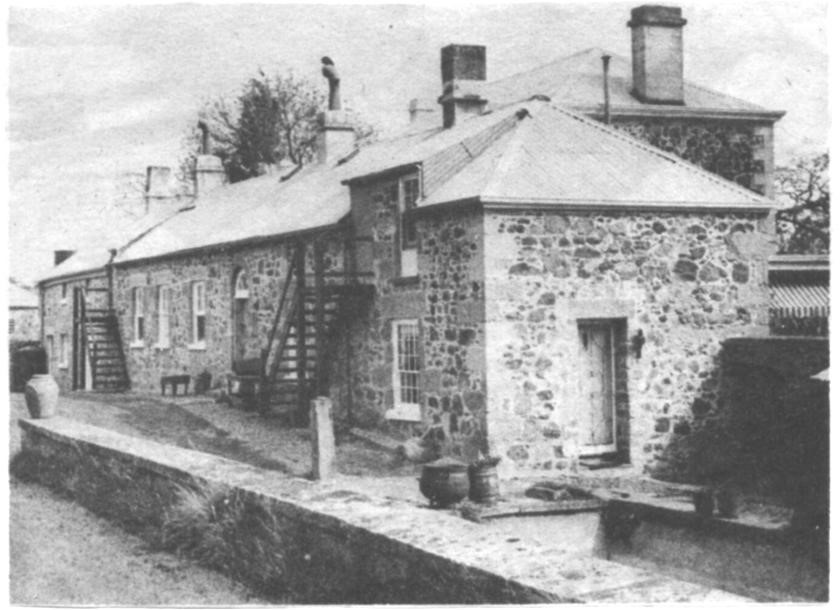 Rokeby House was in the Stokell family for more than 120 years, from when it was built in 1834, and was home to accomplished painter Mabel Hookey.

As well as an artist, Mabel was a poet and writer who was interested in history. She kept a record of the different experiences three generations of Stokell women had living in the house.

Mabel knew that her grandmother, Hannah Stokell, didn’t enjoy the change from north England to a young Hobart town.

“Grandmother thought the settlement a dreadful place, with its dusty roads, where carts would sometimes stick axle-deep in a muddy hole, its smoky whale-oil lamps at the street corners, its convicts, yelling drunkards…” Mabel wrote.

Mabel’s Aunt Etta lived all her life in Rokeby House and inherited it after Mabel’s grandfather, George Stokell, died.

When Rokeby was still isolated from Hobart, it needed to be quite self-sufficient.

Rokeby House, designed as central residence from which a number of farms could be managed, and which employed a good many workmen, had its own smithy and bakehouse and its own shoemaker.

A house which dates back to the days of flint and steel for fire-lighting, that possess a spit for cooking its own tallow candles, storing them in the cellar to harden, a house moreover, that has known no owner that was not of the Stokell family,” Mabel wrote, recalling Aunt Etta’s descriptions.

Mabel spent a lot of time there as a child. Her earliest memories were “of Rokeby House – of a faintly remembered grandfather who took me for very long walks to get the post”.

She moved permanently from Hobart to “the old family home” in 1901 with her sister Dora and her younger brother after their mother died.

By then Rokeby was more connected to Hobart. Mabel and Dora often travelled to town on bicycles or in the horse-drawn dog-cart which, Mabel noted, they were thrown out of at least 13 times.

“She [Aunt Etta] would get the telescope and watch us ‘over the hill’ when we went to town,” wrote Mabel.

By the time Mabel inherited Rokeby House from her aunt she was well known as one of the “Hookey ladies.”

The farm was run by Pat Connor, who managed the property for them for more than 40 years.

“We had two cows and my father used to milk the cows. On a Sunday I used to take up the milk in a billy can on the pushbike. One hand for the milk, the other hand on the pushbike. Knock on the door and what would we have to say? ‘Good morning, Miss Hookey,’” reminisced Maurice.

“My father did everything for them. He ran the whole place. He looked after the garden, managed the shearers, drove them everywhere. He used to hang Mabel’s paintings,” he said.

Maurice recalled the new car Mabel and Dora bought, though of the two of them, only Dora had her license. “A new 1937 Chev sedan. It was pretty nice,” said Maurice.

“We lived right next door to the gate that led to Rokeby House. When we saw them coming, we’d rush over and open the gate because they’d throw something out – threepence or lollies.”

While the farm was in safe hands with Pat, Mabel and Dora were free to spend their time on other pursuits, including painting, photography, long bicycle rides, including a memorable multi-day trip to Lake St Clair, and travel which they did every year.

When Mabel died at the age of 82 in 1953, Dora inherited Rokeby House. She ended up living there almost 60 years and the house only left the family when Dora died.

Pat Connor’s loyalty never wavered even after retiring and with new owners in Rokeby House.

When the bushfires of 1967 roared through Rokeby, Pat abandoned his own home which was lost to fire, to help save Rokeby House.

It still stands today, though the gateway is long gone and is now surrounded by new houses in Rokeby.

Her paintings reflect her great love for her home, with many showing Rokeby House, Droughty Point and Ralph’s Bay.

Other paintings showed Mabel’s adventurous spirit, with trips to Adamson’s Peak, North Bruny, Perth and Flinders Island. Mabel exhibited paintings and drawings in Tasmania and Sydney and also in London and Paris.

Mabel travelled widely, including to Pacific islands, France, Palestine, China and the UK where she spent time in northern England researching her family history.

She documented her travels through photography, though she didn’t exhibit her photographs.

As well as a published poet, Mabel was an author.

Having studied the Reverend Bobby Knopwood’s diaries that had been in a cupboard, since her grandfather bought them in 1838, Mabel chose the most interesting entries.

She published these in the form of two books based on his diaries: Bobby Knopwood and His Times in 1929, and The Chaplain: Being some further account of the days of Bobby Knopwood.

Mabel is known as the first woman to work as a journalist in Tasmania. She worked as a subeditor of the Daily Telegraph and wrote for The Post, The Tasmanian Mail, and The Mercury.

These days, her paintings can be found in various collections in Hobart and Australia, including several at the Tasmanian Museum and Art Gallery (TMAG).

One of the easiest places to see one is in the new exhibit for young children at TMAG. Crouch down in the house and you can find a still life of purple flowers reproduced from one of Mabel’s oil paintings.

Robert Knopwood, MA, Chaplain to Lieutenant-Governor Collins, the founder of Hobart. Edited with introduction and notes by Mabel Hookey. WE Fuller, Hobart 1929.

The Chaplain: Being some further account of the days of Bobby Knopwood. Edited with introduction and notes by Mabel Hookey. WE Fuller, Hobart, (1970 edition).

Thanks to Maurice and Bernadette Connor for allowing us to reproduce several of Mabel Hookey’s paintings.

The Shaping the Plains project is supported by a Clarence City Council Recovery Grant. 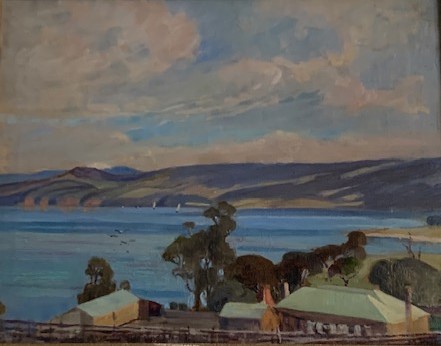 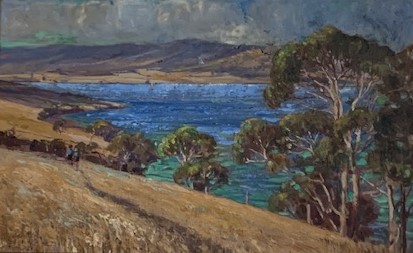 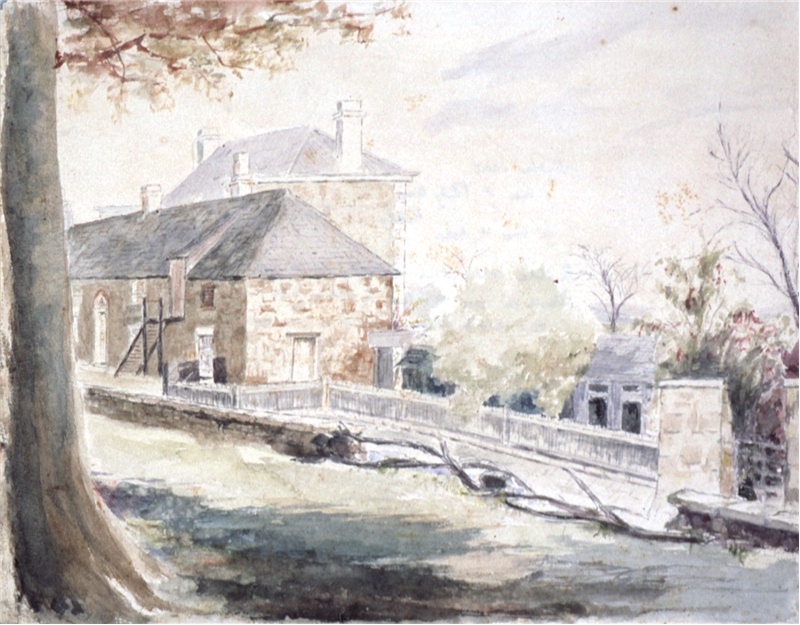 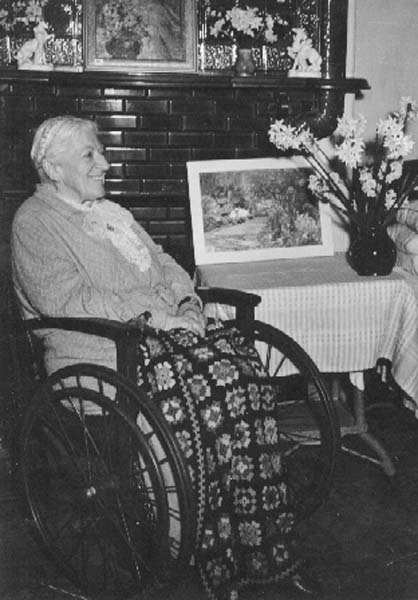 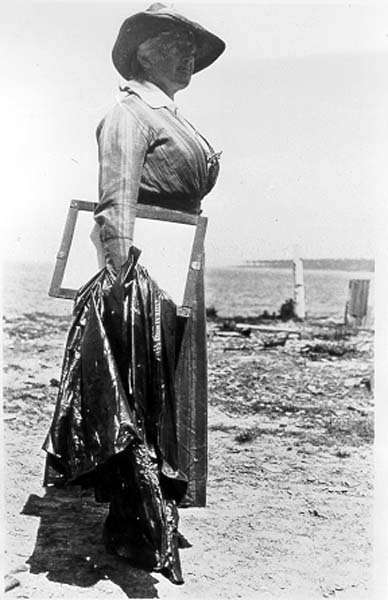 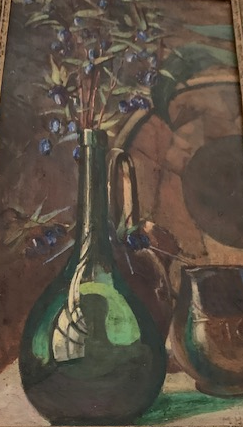