Skip to content
Community vote on new name for their park

Community vote on new name for their park 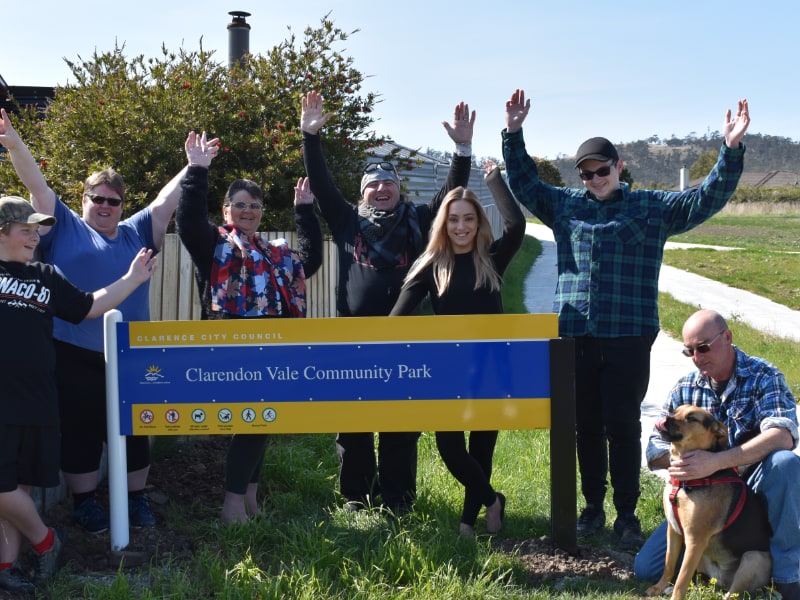 Sitting in the heart of Clarendon Vale, surrounded by Bradman, Gasnier, Marston Street, Mockridge Road and Saladin Circle, this large grassed area was identified as being underutilised and Clarence City Council has recently completed an upgrade to the footpaths and accessways, but more exciting changes are to come.

One Community Together, a local community collective of residents, community groups and service providers, are working collaboratively to support their welcoming, proud, safe and attractive Clarence Plains Community. They formed in 2014 to build on the work of local organisations and community members in Clarence Plains, to expand on the good things happening in the community and work together on some of the challenges.

One Community Together’s agenda is determined by the community through community table consultations, community surveys and community involvement in focus teams, guided by a steering committee.

One of these focus teams, Community Spaces, are creating a sense of pride through encouraging care for places and spaces. They identified improved pathways and lighting in the green spaces in Clarence Plains as an important first step, but also recognised a need to foster community ownership of the green spaces as a valued part of the local landscape.

One Community Together invited the Clarence Plains residents to suggest names through a “Name Your Space” competition with a chance to win one of three, fifty-dollar gift vouchers. Three winners were drawn randomly but the forty three names suggested were carefully reviewed by One Community Together, and the list was narrowed down to fifteen.  The Clarence Plains community were then asked to vote for their favourite three names.   Clarendon Vale Community Park received the most votes and was submitted for endorsement by Council and was approved.

Council has now installed three signs at the main entrance off Mockridge Road, corner of Gasnier and Bradman Streets and Marston Street with a further sign near the Skate Park planned at a later stage.  In the near future, One Community Together will invite the community to take part in the design and installation of a feature sign and landscaping at the main entrance off Mockridge Road, in-between Saladin Circle and Carslake Street.

One Community Together have consulted with community through surveys on planning for lighting in the park. Forty five lights will be installed in a number of stages.  The first stage will be from Marston Street, through to the Clarendon Vale Neighbourhood Centre.

One Community Together will also be encouraging the community to get involved in more enhancements to the park in the very near future.  Council will be planting one hundred native trees throughout the park area within the next few months and a number of areas have also been set aside for community bush tucker and edible gardens; One Community Together will work with Council staff and the Tranmere and Clarence Plains Land and Coast Care group in the coming months to organise community working bees, to design, create and grow these gardens for the community.

One Community Together has sowed the seeds of change for the green heartland of Clarendon Vale.